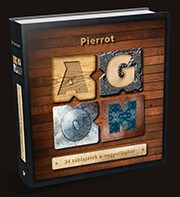 A BOOK YOU CAN PLAY

This book is the manifestation of Pierrot’s passion for traditional board games. The collection features 24 games with their boards, description, pieces and dice. All to invite you for an exciting time travel to far-away places from North America to Africa, Europe and to the Far East.

Pierrot has been immersed in the world of board games since he was a school boy. Later, as a mature musician, he had the opportunity to get a wider picture of the traditions of various eras and cultures, primarily in the field of music and musical instrument histoy. It took just another small step and some assistance of an ethnographist to get aquainted with the cultural heritage of board games as well. As a start, Pierrot envisaged huge wooden chests containing 10-12 board games. All games would be gorgiously crafted of wood, metal, glass, potter or any other sepcial material, along with their pieces. All outstanding pieces of artwork, originally inended for collectors. Although the project has not been accomplished – primarily for logistical and financial reasons – there were  plenty of enthusiastic reactions.

This was the time when Pierrot became a collector of computer games and changed the direction of the board game project. An ejoyable, intriguing adventure plot was created for a dozen of carefully selected board games. The character of professor Samuel Hunt was born and his mission became to find these games at their places of origin. This is today the AGON adventure game series.

The AGON album with 24 board games of the wide world is the revival of the original concept. The rules provided by the book are based on the most widely accepted version for each game – and were thoroughly tested. The book includes the following titles, along with Piertot’s own artwork: